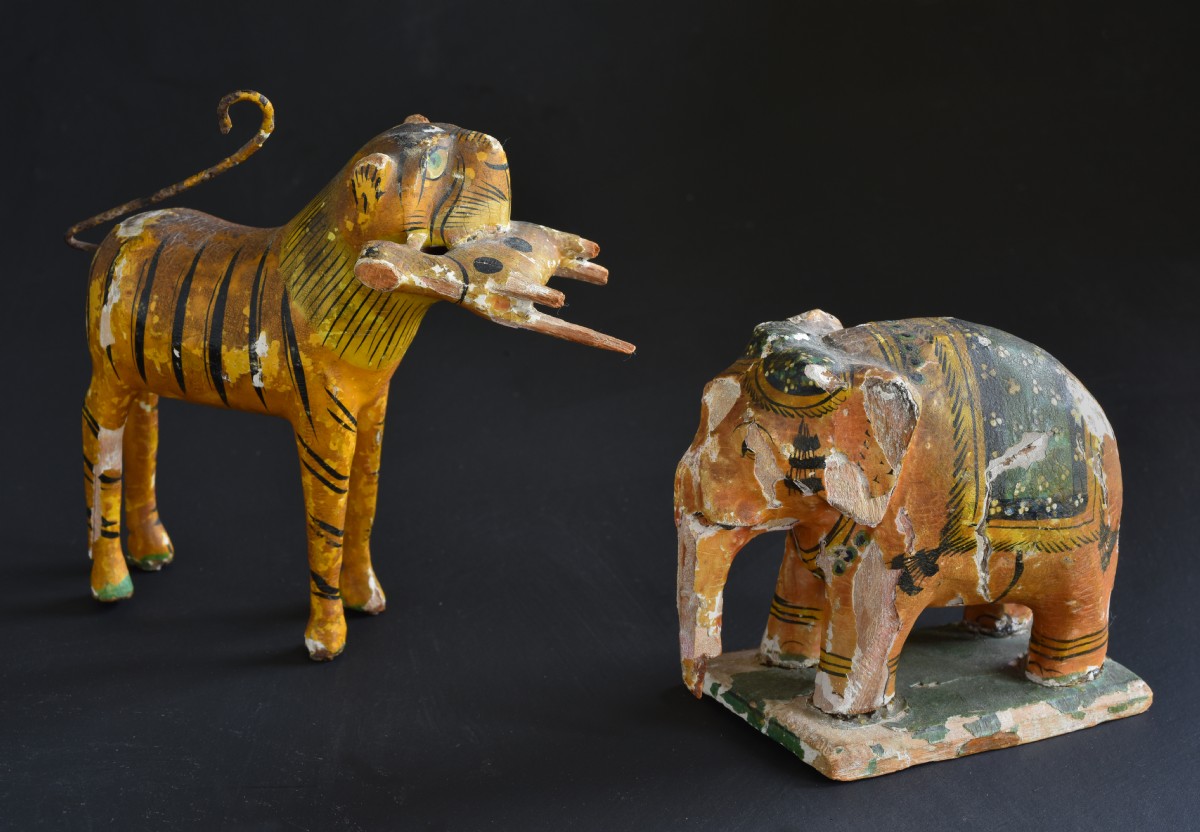 This painted papier-maché elephant and tiger were Tom's constant companions, somehow travelling from India with him and surviving to trumpet and growl from a corner of his desk at Abbot's Manor.

To my shame, I have never been to India, but I hope to go there one day.

This chapter has been written entirely from a combination of my readings of Kipling, advice from the Kashi House team and squinting at Google Earth. Purnea, Simla, Calcutta and Bombay would however have been as familiar to my grandfather Tom as London and Inverness are to me today. I wanted to begin the book with a blast of Indian heat and culture.

Fellow lovers of Kipling will have spotted the nod to the great man in the first line.

Parvati and her mahout brother are both fictional, but there must have been many Indian ayahs in Tom’s childhood and other Indian-born Englishmen describe their love for these nameless women who stood in for appallingly unreliable parents by today’s standards. Tom's father Vesey (yes, it rhymes with sleazy, I am afraid) and Annie did not have a happy marriage and although I am not yet certain they ever divorced, they certainly ended their days back in the UK in the company of different partners.

Vesey is buried in the overgrown family plot in the churchyard outside the National Trust property of Chastleton where his father was the priest. The house contains a Sir Richard Westmacott sculpture (I own another, a sculpted marble foot which those with long memories may recall from the Antiques Roadshow a few years ago) and he and various other Westmacotts all lie in or around the church.

There is one photograph within the family collection which may show Annie, wearing a solar topi. It is fair to say she has a strong and intelligent face rather than any great beauty, a family characteristic.

In this chapter we meet Archie Pugh, Tom’s ruthless senior partner in the legal firm Puanco. I have blackened his character based only on what Tom wrote about his attitude towards Tom’s financial affairs. Tom displays grim humour on being sent a Calcutta Light Horse Christmas Card for 1919 carrying the man's name.

Devesh and Indroneel Bosu are characters of my own invention, but there must have been many such people in Pugh’s employ whose names were never recorded.

All the places mentioned in this chapter are real but my account of Tom’s childhood is invented. We know his parents’ relationship was volatile and they were not always present when he was little.

I own the painted papier-maché and wood elephant and the tiger described in this chapter, but I do not know whether Mary bought them for Tom. Certainly he kept them on his desk, they would have come from India and appear well-used, so they may also have been childhood toys of some kind.

Tom’s hideous fall down the lift-shaft really happened, although whether at Puanco or not I am uncertain.