Chapter 4, Monarch of the Glen 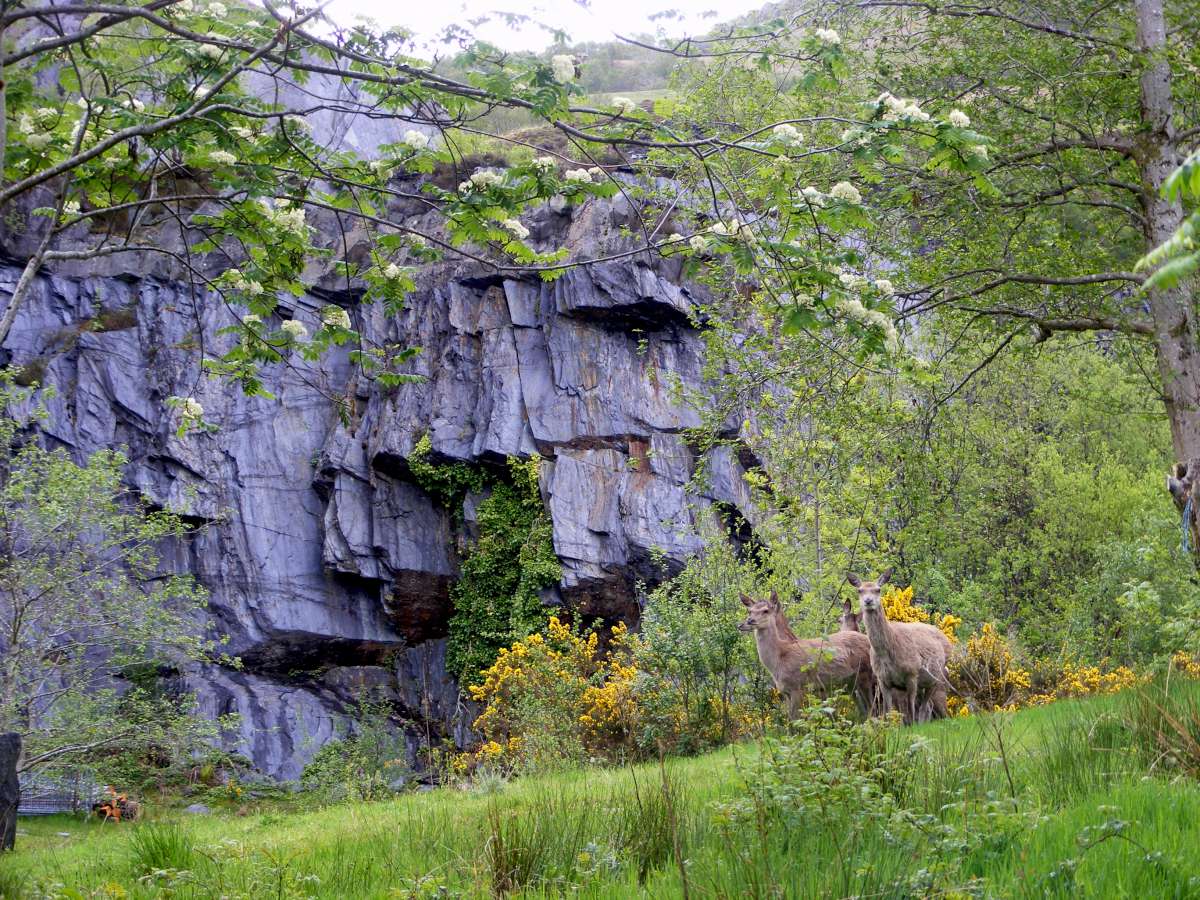 Red deer and the towering slate cliffs - it must be Meall Mòr? Almost. This shot was taken at the beautiful slate quarry of Ballachulish, one of my inspirations for Lochdubh's fictional native island.

The Small Isles do exist, and there are four of them: Muck, Eigg, Rhum and Canna. Meall Mor is my invention entirely. I visualise it as a combination of Canna, the smallest, and the magnificent mainland Slate Quarry at Ballachulish. These are both places in which I have had the privilege of working and are well worth visiting.

Why invent Meall Mor instead of using a real island? Well, as Lochdubh is a combination of at least three real people Tom mentions, I wanted to create a fictionalised and convincing West Coast home for my anti-hero.

Lochdubh is now as real to me as Tom or Evie but he is in fact a combination of characters whom I have so blackened within his own that I prefer them to remain anonymous.

The first person I have used was a real West Coast Highland Laird. When I discussed his grandfather's apparent predeliction for looting with today’s Laird, his grandson, he was very nice about it and said he was happy for me to use that section of Tom's diary as I saw fit. I still felt uneasy however. As the fictionalised Lochdubh I was free to make him into a much darker character.

To him I was then able to add the hapless (and in Tom's diary, nameless) Town Major of Frevent whom Amar Singh dupes into supplying him with a mountain of trench props and lorry fuel. Tom meets the man later and is harangued for almost having cost him his job (‘you and your precious Sikhs…’).

The rape scene in the same chapter is based on a real and very nasty incident described by Tom, where a nameless female photographer shelters a deserter husband and faces terrible consequences. There are a few other more personal shadows lurking within the character of Lochdubh, but those are the main three sources.

Matheson is a complete invention of my own, but I know many splendid Mathesons and have tried to encapsulate in him the tenacity of my fellow Highlanders.

Lochdubh’s father’s death is entirely fictionalised but his upbringing and way of life are very real. I will always hold the likes of Lochdubh, with his disfunctional sense of family and his remote education, responsible for much of the bloodshed inflicted on this world over the past century.

I have to confess that I now visualise Lochdubh as a less fleshy version of Boris Johnson.

The writing of Major Tom’s War as a novel actually began here with this chapter, on board the Queen Mary, sailing Transatlantic back in 2010. I had been mulling over my transcription of Tom’s diary and wondering what to do with it when the idea of fiction tapped me on the shoulder. I had a hero, I thought, so would need a  convincing anti-hero. The scene with Lochdubh’s father, the old Laird, falling to his doom was where I started, writing in pencil on paper begged from the ship’s crew. I sat up all night in our cabin as it poured out of me – the first of many such long, wired, nights.