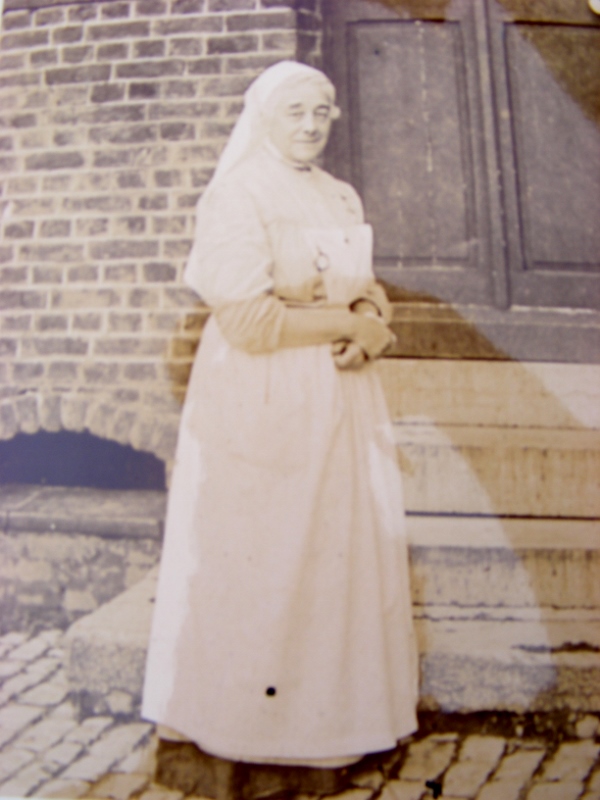 Marguerite de Montfort was a kindly aristocrat who set up a little Red Cross hospital in the collège at Bavay - possibly the same place that Gaston leaves the classroom behind a few chapters earlier.

Bavay is a delightful little town and everything described in the Bavay chapters exists or existed.  It was also damaged during the Second World War but enough survives to enable a visitor to imagine all the scenes in Major Tom's War which are set there.

Marguerite de Montfort kept a detailed diary of her little hospital from the outbreak of war until the Germans commandeered it in 1916. The German doctor Barelmann is documented but not named, so I am grateful to my German friends from Bavay for allowing me to borrow their name for this sympathetic character.

We meet Gaston Derome again in this chapter as the town's mayor, a widower with four children, Thérèse, Alphonse (after his father), Léon and little Marie-Félicie. His wife Louise died just before the war and his elder sister Léonie is keeping house for him.

We also encounter Lars Horstberg, who is a fictionalised character based on two people: one, the real German commandant of the area whose name was Evert or Evers and the other, an escaped prisoner-of-war captured by Tom later in the war whom I have chosen to keep anonymous. His poignant letter to his family forms part of the Archive. It is quite possible that Tom had this man executed and I do not wish to cause any distress to his descendants today.

In this chapter Horstberg is doing his best to be pleasant in the circumstances, and Gaston is resigning himself to having to deal with the man.

Gaston's lovely house in the Rue des Juifs, still in family ownership at present, was commandeered by the Army of Occupation as were most of the large houses and chateaux in the area.

There are records of General French coming to Bavay. High hopes soon dashed! I do not know if the artist Lucien Jonas painted in the Square but it is not beyond the realms of possibility since he was based in Valenciennes.